Pre-nuptial agreements – should you have one? 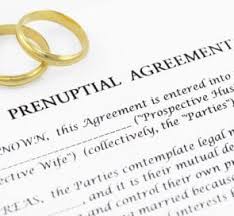 A “prenuptial agreement” is an agreement made by a couple before they get married, although it is also possible to enter into a “post-nuptial” agreement. A pre-nuptial agreement is designed to set out what would happen to the assets and income of the two parties in the event they separate or divorce in the future. A common scenario would be where one or both party entering into the marriage have pre-acquired wealth and they seek to ring-fence this for the benefit of any existing children or for themselves in the event the marriage broke down.

To find out how a pre-nuptial agreement can work for you, please do contact our experienced solicitors on 03331 212345 or info@betteridges.com

“I would just like to thank you and your team for the absolute first class service I received from you all. Yourself (Emily) and Danielle have been so kind and understanding throughout.”

Authorised and regulated by the Solicitors Regulation Authority. Registered in England under the registration number 7556597